Confessions of the Sufferings of a Fear-Deficient Man 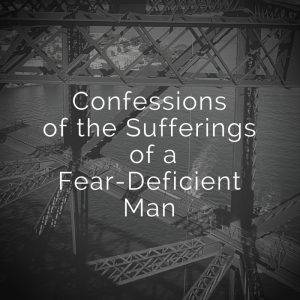 I originally titled this post, “Confessions of the Sufferings of a Fearless Man” with the intent the title would do what all good titles do well—grab your attention. It’s not, however, exactly true that I’m “fearless.” No, I do have fears, but when I look back at my life I would have to say I didn’t have nearly enough of it for my own good at times. It happens to be the case that a lot of the fears I have come from bad things that have happened to me as a result of risk taking—fears I’ve acquired over time.

In fact, you may have never really considered it, but the function of fear is to keep a person from doing stupid things that get you hurt. I mean, in stories it’s normal to admire the person who shows courage, but there’s a reason we all see that as a rare trait. Because showing courage is an awfully good way to get hurt. Not always, but often enough. In other words, if courage were common or easy—well, they’d be a lot more people in the Emergency Room.

So childhood thoughts I had like, “I wonder if I can climb that pine tree all the way up to the tiny little branches?” (You can, but they will break and you’ll fall.) Or “I wonder if I can swim in a river engorged and flowing fast with snow melt?” (You can, but it will be a near-miracle if you make it back to shore alive.) Or “I wonder what it would be like to breathe hard, then squeeze my carotid arteries?” (You’ll pass out, which can be fun if you’re weird, but is not recommended for your brain health.)

All these things produce negative results for the person who feels no fear to try such things. Of course a normal, sensible person isn’t going to do crazy stuff like that; ordinary fears will shield you and steer you back to safer actions. (Well, that’s assuming you’d even think the off-the-wall, random thoughts I’ve had at times in the first place. Perhaps you are not “blessed” with that sort of an imagination. Ahem …)

Now, I did actually have some instinctive fears as a child. I was, for example, afraid of the dark. Which, other than tripping over a random object a time or two, has never actually hurt me at all. Unlike most of the things I felt no fear of until I got hurt. Like falling. Sigh.

So again, I never was really “fearless.” I just didn’t have enough fear. Fear-deficient.

Leading me as a young driver to take huge risk as I was hauling down a Montana highway at 55 miles an hour, under conditions rather resembling an ice skating rink. I saw three or four cars had slid off the side of the road, and I thought for a brief moment, “I wonder if I should slow down?” Nah! I kept on going, full steam ahead! Until I came to a turn in the highway in front of a hill that had been cut away. I tried to turn to follow the road, but guess what, the car just kept going straight ahead, Sir Isaac Newton’s inertia in command. Slamming the car into the rock face. (I did actually feel some fear just before impact—I prayed, “Dear God, I’m dead.” Well, it turns out that due to His mercy, I wasn’t dead—but I was a tiny bit wiser.)

I wish I could say that one major crash taught me to be super-careful on icy roads. Um, NOT. It took several more minor crashes for me to wholly get the message. And you can imagine how I learned to be cautious about hydroplaning—yep, it didn’t matter that I’d already slid off the road under icy conditions. I had to learn the lesson AGAIN by going off a wet road into a security fence. How did I learn not to drive too fast under good road conditions? Well, actually I still do drive too fast, but I’ve had some crashes and stiff fines that told me, “Hey, moron, SLOW DOWN.”

There are dozens of examples of this sort of thing with me: Learning you DON’T randomly walk behind a horse unless you’re comfortable with getting kicked. No, you CAN’T win a fight with a school bully who has an adult body build when you’re still a kid, based on pluck alone. No, you CAN’T randomly say any thought that passes through your head—people will judge you for it. No, it ISN’T a good idea to drink tap water in a third world country. Etc.

As a writer, one of the things I do is portray different types of people. I’m aware of people who are cautious and careful and insightful on a daily basis. As much as I’ve learned to act more and more like that the older I get, it’s not my basic personality type. Which is to take huge risks—and at times, to suffer hugely from them. But over time, I have come to resemble someone who is naturally cautious. About most things. At least some of the time.

To my fellow authors in the world, I ask you to remember how risk-taking can be a personality type when you write characters. Please also remember that things don’t always turn out for the best for risk-takers. Fear exists for a reason—while there are benefits to showing courage, it can also turn out badly. And the best brave characters feel fear but press forward anyway—but bear in mind there exist a certain group of people who don’t feel very much fear at all.

If you happen to be someone who lives with a person who keeps doing dumb things that you think any sensible person would know not to do—say it’s a male teenager or young adult in his 20s—please be encouraged that it’s at least possible sometimes for that person to learn to develop some healthy fear over time.

But he will unfortunately have to suffer some pain during that learning process. That’s what it took for me. 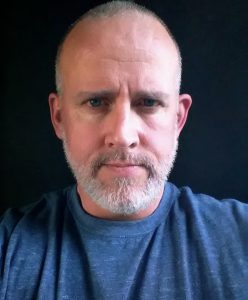 Travis Perry was born in Montana in 1968 and raised in that state. The Crystal Portal, published in 2011, was his first novel. He also contributed to the short story collections Stories From a Soldiers Heart, Aquasynthesis, Aquasynthesis Again, Avenir Eclectia Volume 1, Colony Zero, No Revolution Too Big, Medieval Mars, and Avatars of Web Surfer. An Army Reserve officer who deployed for the Gulf War and later to Iraq, Afghanistan, and Africa, his writing reflects his lifelong interest in science fiction and fantasy, his strong Christian beliefs, and his knowledge of modern warfare.