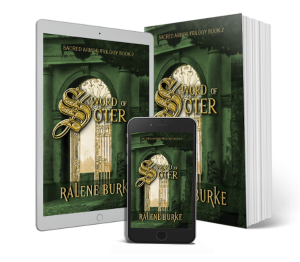 Not everyone can be trusted…

Karina, Tristian, Rashka, and Sam venture forth into the wilderness of Soter on the next leg of their quest to retrieve the Armor of the Creator. With the ancient evil already affecting the kingdom, nothing in Soter is what it seems—from what skulks beneath the canopies of the woods to what lies within the sleek white and gold of the capitol city to the people Karina and Tristan have known since they were children.

Danger lurks around every corner. Discerning who to trust is paramount to staying alive and discovering the location of the Temple of Soter. Yet, to Karina’s horror, Faramos’s reach finds them time and again. The longer they are forced to dawdle, the more people are affected by the growing panic in Soter, and the closer Faramos is to taking over the Three Kingdoms.

Can Karina retrieve the information they need while Tristan keeps his brother at bay? Or will the entire quest disintegrate before they even arrive at the temple?

Soter is a vast forest kingdom with swamps, mountains, and more. Want to see some of my inspiration? 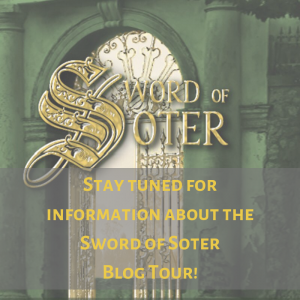 Karina thrust the sword toward Tristan’s gut, but he sidestepped her advance. She stumbled forward a couple of steps, then growled, spun around, and lunged again.

“No.” Tristan batted her blade away with his and swatted her behind. “You’re too impatient. You have to wait for the right opening.”

Karina sucked in a breath. The more she trained with Tristan, the more she wanted to take the dull blade in her hand and run him through. Releasing a long breath, she squared her shoulders, turned around slowly, and smiled as sweetly as she could manage. “I am sorry. I have no idea what has come over me.” She fluttered her eyelashes.

Tristan smirked and crossed his arms, the sword still dangling from his right hand. “Don’t think you’re going to pull one over on me, Your Majesty. I’ve met too many women to be swayed by a little eye-batting.”

Such arrogance. She pushed a strand of dark hair away from her face and chewed on her lip. Tristan had been favoring his left leg ever since the battle at the Aletheian temple. He had refused to let Rashka heal him, saying the limp was nothing … he would manage just fine. Men! However, the limp did mean his left side was weaker. If she forced his weight onto that foot, she could throw him off balance …

“Your eyes betray you, m’lady.” He chuckled. “You’re staring so hard at my left arm, there’s no way—”

She lunged so quickly he had to take two steps back. Without slowing, she swung her sword in from her right side. He tried to parry but lost his balance. He deflected her attack at the last second but still winced and fell back.

She ambled over and put a foot on his chest, her sword hovering over his heart. “Maybe so, good sir, but you seem to have landed on your backside.” With a smirk of her own, she pivoted on her heel and walked as calmly as possible to the fire pit.

Sitting at the edge of the small fire, Sam leaned over, his light brown hair flopping around as he stirred a stew of potatoes, carrots, and spices. Unlike Tristan, Sam had allowed Rashka to heal his wounds once they had reached River Branch, before crossing into the kingdom of Soter. No one would know he had barely been able to walk a week ago. He appeared as fit as ever.

With a wry grin, he handed Karina a piece of dry meat. “I knew you had some fight in you. It’s about time you showed him a thing or two.”

She tossed her hair out of the way, casting a casual glance over her shoulder as Tristan sauntered over to them. She shrugged. “I guess I learn quicker than he anticipated.”

Tristan muttered something as he pushed by her to grab the bag of dry meat. Karina giggled. When he glared at her, she shoved her piece in her mouth.