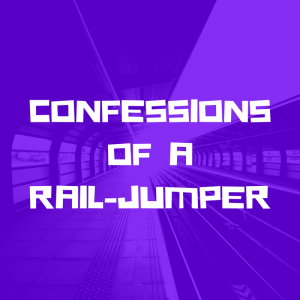 A few months ago I opened an Etsy shop and named it Jumping Rails. Part of that name choice came from an experience in which I’d jumped a fence to cross some train tracks despite the warning sign not to, but the deeper reason has to do with my path as a creative person. You see, I am constantly jumping rails from one pursuit to another.

Pretty much any time before my senior year of high school, had you asked me what I wanted to be when I grew up, I’d have said, “Artist.” But after graduation, I honestly had no idea what direction I wanted to go. I still loved to draw, but didn’t like the idea of it becoming “work.” Art stayed a hobby for me, but it didn’t at all stay centered on drawing, even though drawing was the heart of what I considered true art.

Over the years, art has shifted from one thing to another for me. Some examples:

Assembling a multitude of craft kits

I’ve had to shed the strict “artist” label I’d held onto during my childhood and adolescence, but it’s come off layer by layer over many years. I spent a lot of time feeling guilty for not sticking to one art form, worried that I was abandoning certain talents. I have wondered off and on what it says about me that I am constantly changing direction and focus. I’ve thought, “I must not be an artist anymore because it’s been so long since I’ve drawn,” all the while not realizing that all creative things are art as well in their own ways. The guilt was never quite strong enough to keep me from jumping, though. I have never been one to force creativity. I found inspiration and it called relentlessly.

It wasn’t until after I started writing that I finally began to see the connection. It finally sank in that I was using the same creative force to write stories as I had to draw portraits. And that same creative force was at work when I scrapbooked, or sewed, or reupholstered a set of dining room chairs. I also accepted that painting didn’t have to mean masterpieces; I didn’t have to be Da Vinci or Van Gogh. I could paint space ships and fairy trees and it still counted as art to me. I could glue burnt paper and brass keys to painted canvas as long as what I created made me happy and counted as art to me.

All of those things, all those art forms, are part of a giant rail system, but for so many years I thought to be a true artist I needed to stay on one track. Now, I’ve had time and life experiences that have shown me all the branches of creativity cross each other. (As we get older, we are more able to see just how complex life in general is, so carrying that over to art makes much more sense.) I’ve gotten to know other artists and creative people who have embraced the different aspects of their own natures, and I’ve learned from their examples. Now I know it’s perfectly okay to jump the rails from one track to another as long as I keep the train moving. 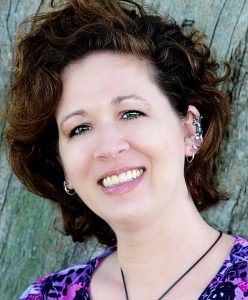 Kat Heckenbach spent her childhood with pencil and sketchbook in hand, knowing she wanted to be an artist when she grew up—so naturally she graduated from college with a degree in biology, went on to teach math, and now homeschools her two children while writing. Her fiction ranges from light-hearted fantasy to dark and disturbing, with multiple stories published online and in print. Her YA fantasy series Toch Island Chronicles is available in print and ebook. Enter her world at www.katheckenbach.com.

Amazon page for Toch Island Chronicles ebooks on sale for $1.39 each- https://www.amazon.com/s?ref=series_rw_dp_labf&_encoding=UTF8&field-collection=Toch+Island+Chronicles&url=search-alias%3Ddigital-text