Happy Wednesday, y’all! You want to talk about horror? Let’s talk about the snow outside when Spring is less than a week away! Where was that snow a month or 2 ago when I wanted it to be here? Now I’m ready for the flowers and the warmer weather. (Warm, not hot.)

This week, we’re continuing the Confessions series with an interesting post from a horror writer … who doesn’t like zombies. Frankly, I’m with him on this. Most of the time. Well, you’ll have to read on to see what I mean … Welcome, Randall Allen Dunn! 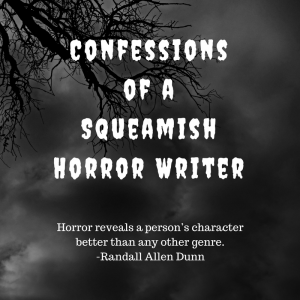 Confessions of a Squeamish Horror Writer

Don’t get me wrong. As a writer, I like the idea of a bunch of monsters attacking innocent people, some of whom then gear up to destroy the monsters in a mass bid for survival. I just wish the monsters weren’t a gang of dead whatsits crawling from the grave, eyeballs hanging out, hungering for people’s brains while half their limbs fall off.

Seriously, how disgusting do they need to be?

It might not surprise anyone that I hate zombies. Until they discover that I’ve written my own version of a zombie story, in which werewolves attack people in a fairy tale province. Or until I mention that I love horror stories. That’s when people might ask, “How can you love horror, but hate all the gross things that come with it? And aren’t you supposed to be a Christian?”

It only makes sense when you discover, as I did, how to recognize a horror story.

What is a Horror Story?

In high school, I was cast in the play, Dracula. The vampire story concept fascinated me. A handful of people try to defeat a demonic beast, when they need an army to even survive. But since no one will believe them about the threat, they must fight the vampires on their own.

Which makes them desperate. So desperate they’ll do things they might never do, or imagine themselves doing, under any other circumstances. To defeat a vampire and save humanity, these heroes would steal a car, tell lies, travel great distances in the most severe weather or darkness. Even dig up someone’s grave to chop off their head.

The point is the threat of that horror – whether it’s a vampire, ghost, demon, savage animal, or even psychotic killer – reveals the true nature of those heroes. This, to me, is the core of horror and the reason it appeals to me. Horror reveals a person’s character better than any other genre.

Take an example from the film, Jurassic Park. (Yes, Jurassic Park is mainly a science-fiction story, but it’s also a horror story like Jaws, Alien, or Dracula, in which people must fight to survive against a monster that cannot be reasoned with.) When the T-Rex first attacks, the lawyer flees his car, leaving the children unprotected to save himself. Dr. Grant, having clearly established how much he loathes all children, leaves the safety of his car to distract the T-Rex and rescue them. The horror of the T-Rex forced both Dr. Grant and the lawyer to discover their true nature, as a coward or as a fatherly hero.

A horror story is similar to a suspense thriller, except that the threat can only be dealt with in limited ways. The enemy of a suspense thriller is usually a human or an organization that threatens the protagonist. That person or group can be persuaded to relent or can be imprisoned. These same methods won’t stop a horror story threat. Even when the threat is human, like the deadly killer in Halloween, no one would feel safe if this “monster” were simply jailed.

There are only three ways a horror story can end. Either a.) the monster is destroyed, as in Dracula or Jaws, b.) the heroes permanently escape from the monster, as in Poltergeist or the film version of Jurassic Park, or c.) the monster wins.

The reason many people – especially those of us who love Jesus – can’t stand horror stories is because the only horror stories we know about are the third version. The one that Hollywood filmmakers often choose. Why do filmmakers want horror stories in which the monster wins? Because if Dracula or Freddie Kruger survives, they can continue to star in several money-making sequels. That’s why.

But this third option isn’t always bad. Several cautionary tales like those in The Twilight Zone have sad endings in which the supernatural phenomenon – the horror “monster” –destroys the protagonist. Yet the best of these stories still reveal the character’s true nature, exposing flaws that result in that person’s destruction. (For those who don’t know, a few minutes after fleeing the T-Rex in Jurassic Park, the lawyer gets eaten. Abandoning the kids was a bad moral choice.)

As for me, I don’t usually want the monster to win. Which is one of the reasons I don’t like most popular horror movies. In classic horror films like Dracula, the monster is vanquished. When evil wins instead, it sends an uncomfortable message. (Made even less comfortable by gross effects and falling zombie limbs.) In cautionary tales, we see a protagonist who makes bad moral choices get their comeuppance, showing that a supernatural justice is served, even though it is often severe.

Horror deals with the worst threats we can face. Seeing characters deal with these threats shows us what they’re made of, and what we ourselves can choose to become. Even when evil wins because of a protagonist’s poor choices, we know that that person could have chosen differently and saved themselves. Even in a tragic ending, we know there’s always a chance for good to overcome evil.

That chance – and that choice – is what makes horror such a valuable genre to me.

So if I tell you I love horror, don’t show me blood or gore or falling limbs. Show me a story that reveals a character’s true nature, lurking beneath the surface. Show me whether, in the face of the most severe challenges, they become a hero or a human form of monster.

I would love to read a story like that.

(Want to keep up with the Confessions posts? Be sure to sign up for my newsletter!) 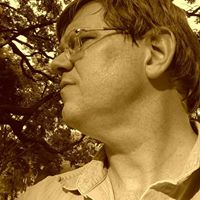