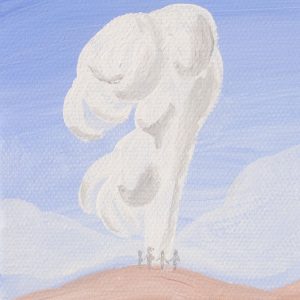 There’s a city in New Zealand, where my father was born, where as a child he bathed in backyard thermal springs and steaming ponds in the public park. These days I live a few hours away. Imagine if you will, after a short roadtrip, cresting the rim of a caldera and coming face to face with a crater lake containing an island formed by later eruptions. Imagine descending to the town at the lakeside and blinking at steam that rises from the roadside drains and gardens. Imagine wandering a path by a boiling stream that leads to a grey pumice beach; dig your toes into the rough sand, encountering hot water that surges from just below. Imagine sleeping on grass warmed by thermal currents underneath it, to the lullaby of a blubbering mudpool. Imagine the inescapable scent of minerals weighing down the air. This is Rotorua. And this is why its utter strangeness has captivated me since I was small.

My country is full of thermal excitement, from the hot crater lake on top of snowy Mt. Ruapehu to the Coromandel beach where one is well advised to bring a spade and settle into a warmed sandhole for the day; from the Waiwera spa near my home, to Lake Taupo’s huge crater and nearby geothermal power plants. But nowhere is it so concentrated as Rotorua. Springs bubble all around its lake, on its island, through the suburbs, pockmarking Kuirau Park by the hospital, appearing and disappearing in yards and streets and concrete alleys. Several of the geysers are reliable, shooting off every hour or so – others erupt from the lake’s edge to frighten nearby residents with towering fountains at uncanny hours. Sometimes a hotspot in the park explodes, splattering the vicinity with ashy mud. Locals brag of boiling an egg in thirty seconds, when lowered into certain springs. Not far out of town there are strings of thermal arenas with jewel-coloured pools, self-combusting stones, pathways warmed not by the sun. Hot rivers, secret swimming holes in deep forest, myths and legends surrounding the spirits who watch over the springs.

I suppose it was inevitable that all of this should lead me one day to create a story where these thermal forces, these spirit guardians, bestow supernatural powers on certain humans when they come into contact with mineral-laden waters, gases, or mud. Each spring with its own unseen creature and its own flavour of gift for the initially clueless human. I took all of the most mysterious, most fascinating facets of Rotorua and made them into the story that I wanted to read. As someone said to me while I was working on it, the setting was totally begging for a superhero tale. Not of the usual kind; here we have no capes, no flying or immense strength, but a gentler kind of natural gift that helps our heroes use their minds more fully, connecting with nature, with the earth they live on.

When I had written three local stories for my gang of unlikely worldchangers, my thoughts turned to what else they could do. The answer was right in front of me: there are geothermal hotspots all over the world, along with volcanic and seismic action, all things now linked to the spirit world in my stories. The Pacific Ring of Fire, of which we are a part, where new islands even now rise from the sea as bare black lava. Tonga. Hawaii. Iceland. Italy. Yellowstone.

And thus I became a geyser hunter. It was Yellowstone that proved the next most attainable goal. I wanted to see how America’s primary thermal area compares to Rotorua, which I know so well. A few days was all we could manage; we signed up for bus tours, because we had no clue what to see and wanted to trust some expert guidance. I knew it would be different, but just how different…

Yellowstone blew me away. Not literally, thank goodness. But where we in New Zealand have planted a myriad of towns and cities over our live thermals, Yellowstone is empty of civilisation except for tourists and those who provide for them. Vast wild hills threaded through with only occasional roads; strict instructions not to touch the thermal waters. Some of the sights reminded me of home, like the coloured pools and terraces, the geysers and steaming rivers. Other times, it was all I could do not to let my mouth hang open, such as at the incredible Mammoth Terrace site – the biggest single thermal feature I’ve ever laid eyes on, dwarfing man and beast alike and set in a mind-boggling mountain gorge.

Wyoming’s thermal features are more dangerous than ours, which our people have used for centuries to bathe, to cook, to heal. Eruptions and earthquakes are the actual danger rather than the springs in most cases. The caldera in Rotorua is about one-third as big as Yellowstone’s rim, and Taupo two-thirds, although the active area is comparable in size, spanning from the mountains south of Taupo all the way up to Tauranga, Miranda and Ngaruawahia. Each caldera could erupt again at any time. Ours are smaller, but then, they say they heard it in China when Taupo went off.

They’re all only dormant, these volcanoes and faultlines of ours around the world. A perfect illustration of the fragility of life and just how dependent we are on their continued silence – but also a source for imagination. If the forces in the earth have such powerful physical effects on the land, why couldn’t the same be true for people?

I have many more geysers to hunt down and write about, all around the world. But for now, I’ll visit Rotorua again, imbibe its unique thermal urban atmosphere, and dream of the gifts that minerals might bestow. 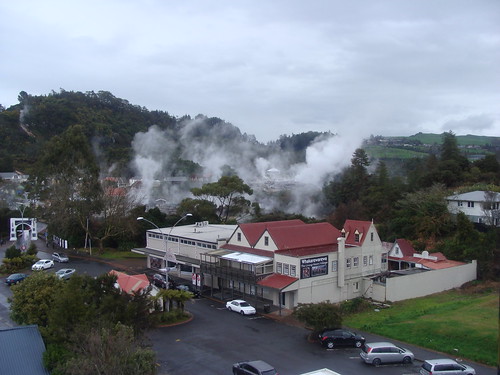 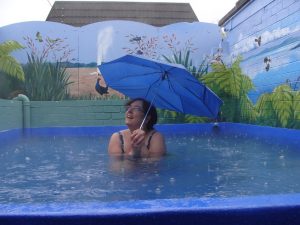 Grace Bridges is not only a geyser hunter, but a semi-professional cat herder and kitten adoption facilitator. Indie publishing and freelance editing have been her focus for the past ten years, including 40+ titles in her Splashdown Books brand. She has written several novels in space opera, Irish cyberpunk, and in 2017 the EARTHCORE science mythology YA series set in New Zealand. Her short stories and non-fiction appear in various anthologies and online magazines. See www.gracebridges.kiwi for more information.