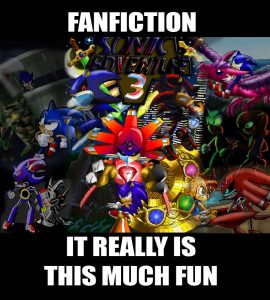 “Please, please, can we have a Sega Genesis?” my brother wheedled. “I’ll buy it with my birthday money!”

The light was green! We bought our first video game system (and every single system after that). We played Sonic the Hedgehog and Jurassic Park and the maddeningly difficult Disney games. Batman Forever became a fixture.

Then–horrors–one hot summer day, our parents decreed that we spent too much time on games. “One hour a day,” they admonished. “Go do something else.”

Mutinous, I stalked upstairs to my desk. As a homeschooler, I had a very nice desk where I did my school and drew pictures. I busted out a binder, filled it with loose-leaf notebook paper, and began writing a story that mixed my two loves at the time: Sonic the Hedgehog and Jurassic Park.

Fan fiction had entered my life.

It was years before I even knew the term fanfiction. I just wrote my Sonic stories and read them aloud to my siblings. I adapted the games into epic novels, mixed in elements from the cartoons, crossed over other games, Michael Crichton’s book on nanotechnology called Prey, anything I wanted. The story universe grew into a sprawling monster of a thing.

I taught myself to type so I could convert my terrible handwriting into neatly typed pages. I consumed every book on writing I could find. I learned HTML to build a Web 1.0 website where I could post my stories, and maybe even connect with other kids who wrote Sonic stories.

The 90s gave way to the 2000s. My crappy little website grew into a fair-sized fansite with a busy community of creatives. I kept writing. I really wanted to try to write something publishable, but I didn’t really know how to write outside the universe I had spent so much time building. I dabbled here and there with a few ideas, but nothing stuck.

Fast forward. I got married, closed my website, got a job, and generally moved on with life. But the writing bug never left. I just loved burrowing inside a universe and reconstructing it from the inside out.

After I wrote a few books in my husband’s Spacetime universe (note: still fanfiction), I finally figured out how to convert fanfiction into original fiction.

Your favorite character is still your favorite character, even with a bit of a facelift. Or even living in a different world. As long as you give yourself enough characterization hooks to constantly remind yourself of who this character really is on the inside, you can write something ‘original’ while still secretly writing your fanfics.

“Okay,” I said to myself. “I happen to love young adult paranormal romance. But I hate vampires. What if I used this one reformed villain from my fanfics, and the heroine thinks he’s a vampire, but he’s a different kind of monster?” 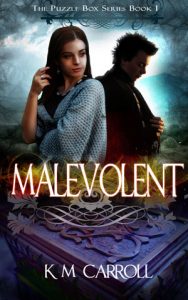 As I worked to translate my reformed villain from one universe to another, I had to do a tremendous amount of world building to explain how the magic worked, how he kept himself alive, and better yet, how the magic was killing the heroine. I wanted bees that collected magic, and I had to build explanations for that. Slowly my fanfic character became his own person–deeply flawed, deeply wounded, compellingly loveable.

I turned to my heroine. She needed to be just as interesting as the monster. In fact, the more opposite she could be, the better. I imported another of my fanfic characters, a spunky, spitfire girl whose attitude stemmed from her massive insecurity. She’s impulsive. She’s headstrong. She’s stubborn. And when she decides that the hero is a vampire, she’s bound and determined to prove that he is. Except that he’s actually something worse.

“And now,” I thought to myself, laughing, “which of my really bad guys can I bring in to make their lives miserable?”

The funny thing is, the villain of Malevolent isn’t from my fanfics at all. If anything, he’s inspired by Dr. Phoenix from N.D. Wilson’s Ashtown Burials series–gentle, kind, and utterly ruthless.

As the books went on, the characters really stood on their own feet. The fanfic template faded. But it jumpstarted the delight, that kernel of joy that kept me up late, typing words until I had callouses on my fingertips.

Better yet, the readers enjoyed the book, too. They had no idea who these characters were originally. Heck, even in my fanfics, these characters barely resemble their official selves. My character arcs had been that deep. And now, given new life in a new setting, these characters whom I had loved for years could charm new readers.

So, if you, like me, are having trouble switching from fanfic to original fiction, just do it like this. Trick yourself. Use your fanfic characters, but dress them up so that nobody recognizes them except you.

It also works for old projects that you would like to rewrite and publish. Take only the gold from those early drafts–only the things that you love, love, love. Toss the rest and start fresh. Your readers will thank you. 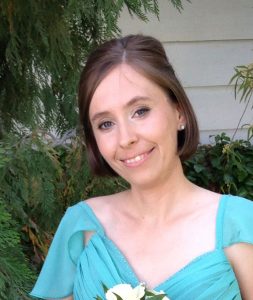 Kessie Carroll is a second-generation homeschooler. When she’s not chasing kids, she’s writing, drawing, blogging, or playing Minecraft with her hubby. Catch her online at her favorite haunts: